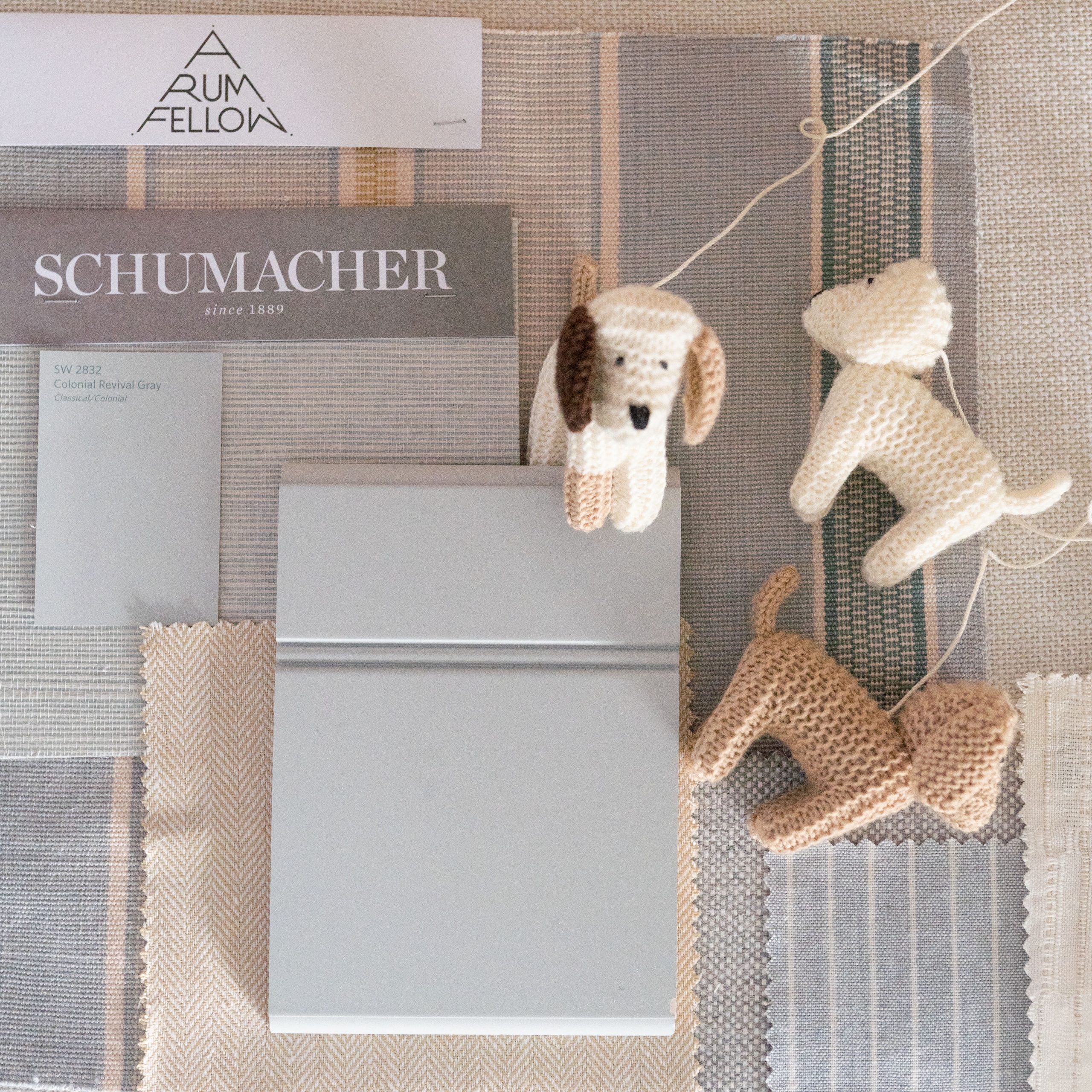 My favorite project ever.

Maybe my favorite project, EVER.

I’ve been getting lots (and lots!) of questions about how our nursery design is going. Truth be told, it’s been quite the logistical journey, ha! But by far my favorite project to date. Although, you are in for a real ride with this update… so pour yourself a cup a coffee. Get cozy, it’s a long one! 😉

When we found out we were having a B-O-Y I was so excited to dive in to designing a boy room. Right off the bat I knew I wanted it to be charming, timeless, and handsome. After doing a ton of research on Pinterest I realized that there was little out there for boys that really made my heart sing, so I pulled together my own color schemes instead.

I was really drawn to a this beautiful dusty warm blue paint swatch and this fabric sample from Schumacher, but I felt like both needed to be grounded with something. After playing around with the colors I realized I really liked browns and neutrals. That instantly inspired a color pallet to launch with!

Once the colors where set it made design decisions a whole lot easier. And this little puppy mobile was the first thing I purchased for the room. It felt like the *perfect* piece to design the entire space around… so far it’s been our muse. 🙂

How We’re Making it Happen

With both Ryan and I working from home, we use every square inch of this house. We considered moving before the baby arrives, but honestly, we love our home so much and we are just so content here. It’s perfectly sized for us for now. Will we move one day? Absolutely YES, but it just doesn’t feel right yet.

So that being said we’ve had to get creative and flexible! Ryan is currently working in the room that will be our nursery, so we are waiting until the veerrrrry last second to officially move him out and back into my office with me. Truth be told he’s on the phone like 9 hours a day so I’ll be investing in some serious noise canceling headphones, and hoping for the best! ha! His company’s office-space is currently under construction and he should have a permanent office soon, so fingers crossed it will work out!

Until then, Ryan is in the construction zone.

The Build Out Plan:

Let’s talk demo and build out. Like I mentioned our home isn’t large and there is ZERO storage. Like zero, so this is where we’ve had to get very creative!

The room its self is about 10×10 with a very awkward closet. So this is where we’ve been getting extra creative! After much back and forth we decided to do custom floor to ceiling built-ins on the main wall and nestle the crib in between. The built-ins will act as a new closet/storage, plus, who doesn’t love a built-in?! We are SO excited about this feature and can’t wait for it to come together.

The built-ins will be a beautiful dusty blue and we’ll do a matching shade of grasscloth wallpaper in between. Simple, sweet, and handsome. I’m THRILLED.

The other obstacle we have in this room was the lack of space for a changing table/dresser. It was obvious that we weren’t going to have space for both a rocker AND a dresser in the room, but I was unwilling to give up on the idea of a rocker. It’s legitimately all I’ve ever wanted! So we went to plan B, which was demoing the closet.

We’ve HATED the closet in this room for years. It’s so awkward and not even a little bit functional. But after taking some measurements we realized if we blew out the walls around the closet and opened it up it would be the *perfect* little nook for a dresser/changing table. Within moments of deciding that was a good idea Ryan was ready with a sledge hammer… did I say we’ve hated this closet for years?! Because clearly we have. 😉

Another thing we are doing is swapping out all of our doors to solid core wood doors since the sound in this house travels like you wouldn’t believe! I’m not convinced it will be completely silent when the baby is sleeping. I mean, how could I with both Ryan and I working just feet away from the nursery and a Dolly squeaking her toys all day long. But at least we can give ourselves a leg up with solid core doors and a good sound machine, ha!

A few weeks ago both Ryan and I were a little overwhelmed by it all, but I’m happy to report that we are finally making some REAL progress! The closet demo is done and the electrical is in. Ryan is finishing up the drywall, framing, and flooring! It’s definitely starting to take shape! I always feel better during the “put-back-together” stage of a project.

The wallpaper has arrived and it’s BEAUTIFUL! The built-ins have been ordered and should arrive for install sometime in April, along with the crib. Our rocker is currently awkwardly sitting in the dining room, ha! We found a dresser/changing table at Renninger’s last Saturday (for $40!!) and I have a handful of quotes out to get it refinished. I need to order a rug, a roman shade, a mirror, a tiny side table, and accessories. But other than that I feel like we are making some REAL progress.

One thing is for absolute certain. We will NOT be those people just sitting in the nursery dreaming/waiting for the baby to come. It will 100% be down to the wire, but we like to keep things interesting around here. 😉

Also, the great thing is that, really, the baby won’t care and needs little to nothing! Just love, diapers, blankets, and a warm bassinet… and we have that more covered.

Everything else is just icing on this already *very* sweet cake!