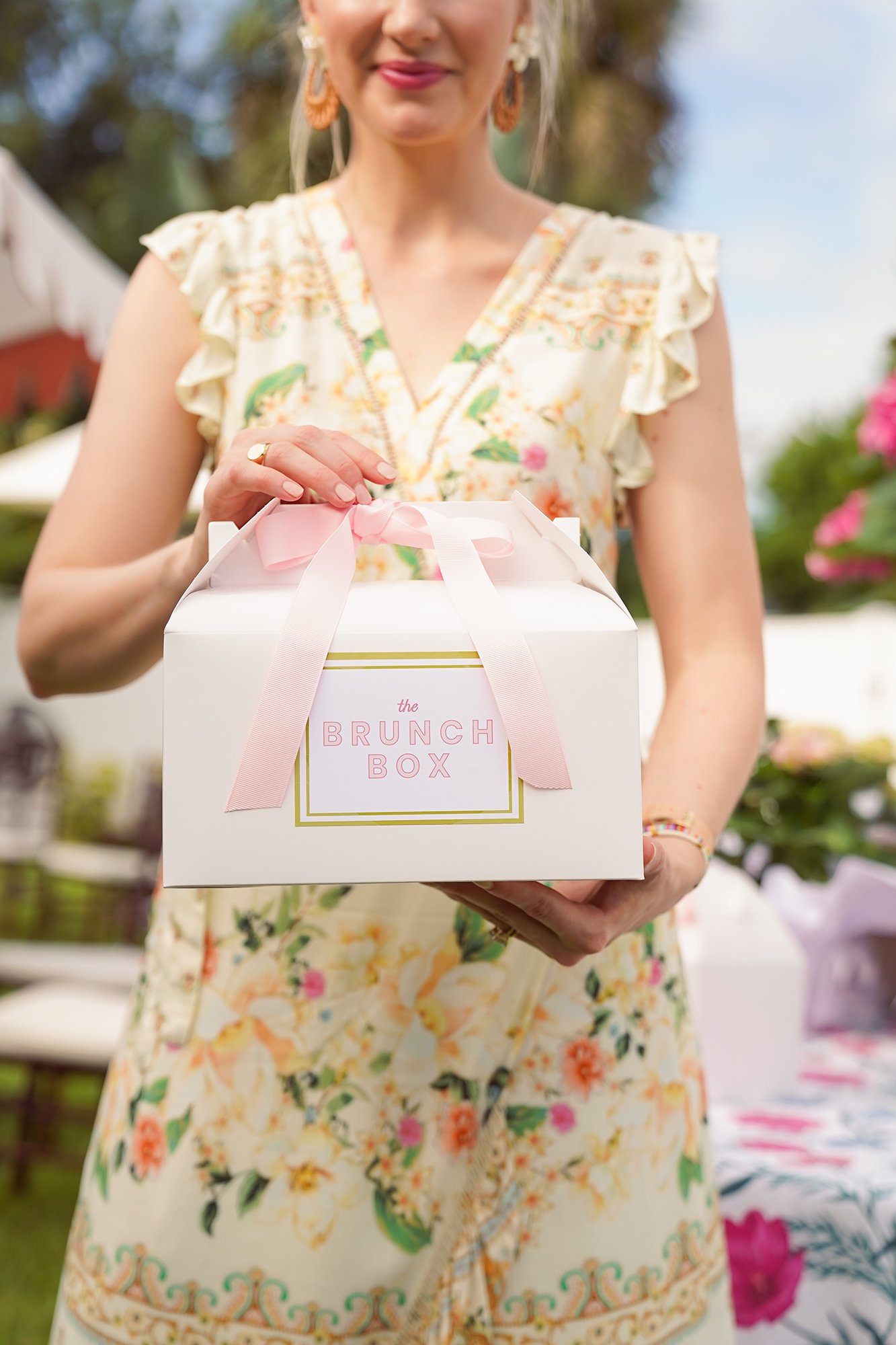 All the details on the "social distancing" baby shower I threw for my sister over the weekend, complete with details on the setup, food, stationery, and butterfly cupcakes!

Hopefully this post gives you a few ideas on how you too can safely celebrate your loved ones during this season! And truth be told, I loved the way this party turned out so much that I think post-Covid this is how I’ll be throwing showers! SO. MUCH. FUN.

All the Details on the Sweetest Day

Over the past few months I have been racking my brain trying to figure out how I could logistically throw my sister the baby shower of her dreams. I had originally planned to throw her a shower in May, but of course that wasn’t going to work because of the Stay at Home order, so I had to go to plan B (… more like C, D, and E! ha!).

When the Covid-19 shutdowns began, I was heartbroken by the idea of her not having a baby shower, and wanted her to have a day that felt as special as she is to all of us. To be quite honest with you, she hasn’t had the easiest pregnancy (not even factoring in Covid) and I wanted her to be celebrated. She’s already the best mom. The things she’s had to endure over the last 7 months (I mean, wow guys, if you only knew) for her sweet baby has put her to the tippity top of mom status in my opinion. So all of that to say, I was GOING to throw her a shower… pandemic or not, I was going to find a way to safely make it happen.

I tossed so many ideas around on how to logistically make this shower work, when one night after dinner I was boxing up our leftovers and a light bulb went off in my brain, “BOXES! I’ll box EVERYTHING!”

After doing a few quick Google searches on food grade boxes and chatting with Kyla’s best friend Alissa who was co-hosting with me, I realized we can totally pull off a fancy picnic style baby shower! It was going to require a few spreadsheets and some serious logistics, but it was TOTALLY doable… so we ran with the idea… but the clock was ticking!

My sister is measuring ahead of schedule AND it’s already 100 degrees outside, so we technically had 3 weeks to make this dream shower come together. So the first thing I did was come out of stationery retirement and dusted off my watercolors to sketch the invitations!

The baby’s nursery has a few butterfly things, so I knew I wanted to incorporate butterflies into her invitations. I love the way these pretty soft-blush and dusty-olive invitations came together. They felt so very feminine and so very Kyla. Also I found a shop on Etsy that sold vintage stamps with a collection of butterflies… because let’s be real here, details are everything! 😉

P.S. For those of you who are new, Ashley Brooke Designs started off as a full service stationery company, many moons ago!

The next project we started on was the logistics of the shower. I was originally going to host the shower in my backyard, but after going over the guest list and realizing we needed more space for social distancing, I felt more comfortable fitting 40+ people in Kyla’s backyard than mine. So we loaded up my dad’s trailer and moved our umbrellas, fans, tables, and chairs to Kyla’s.

It ended up working out perfectly. The invitation told people able to come and go as they pleased between 9-12pm, assuring that not everyone would be there at the same time. Yet also gave those who lingered a place to safely visit or sit in the shade with a good distance between them!

I also kept Kyla under the porch which made a natural and safe boundary for her! Everyone kept their distance while still being able to enjoy chatting about all things baby and see her open gifts! Also, I do think one of the more genius things we did was bring a window A/C unit and set it up on the porch. She had fresh, cold A/C blowing on her the entire time… keeping the pregnant lady cool was of HIGH importance.

The food was the trickiest part about this entire party. First I wanted it to be GOOD homemade food, like I would typically do for a baby shower, but I also wanted people to be comfortable, which meant there would be no “food table”. That’s were the boxes came in. I ordered these adorable to-go boxes and made custom stickers (I made a FREE download of them for you here! Just coordinate the Avery Label numbers that are in each file name and print.) and tied a bow on top. Each guest received a brunch box as soon as they entered the backyard! Absolutely no touching necessary, ha!

Each brunch box included homemade chicken salad, fruit, croissant, cupcake, bottle of water, paper straw, napkin, and utensils… they were a HIT! My dad and Ryan were inside the house packing the boxes as people drove up. We had coolers inside that housed the refrigerated items to ensure that each guest had a fresh box!

We also offered guests their choice of a “fancy” canned beverage: La Colombe Draft Latte, Ohza mimosas/bellinis, or Spindrift sparkling water! This ensured that everything was completely and utterly safe, i.e. no drink table!

Truthfully, the brunch boxes were a labor of love, but we had so much fun putting them together the night before! We had a sanitized assembly line going and it was a blast. Although, I’m not sure my family will ever let me live down all of the stickers I made and had them punch out and place on boxes, ha! I think everyone will be happy if they don’t see a sticker from me for a long while!

Did the Guests Come and Go or Linger?

But I will say, I thought our guests would just swing in and out, but that really didn’t happen. Most people stayed! They just popped open their brunch box and enjoyed the sunshine while sipping on bellini’s and eating their gluten/dairy free cupcakes, ha!

My very favorite detail of the entire shower was the edible butterfly on the cupcakes. My sister actually ended up making the cupcakes. I begged her not to, but as a former pastry chef she REALLY wanted to make them. So I gave in and let her, but I was in charge of decorating them. After some serious research I found these beautiful edible butterflies on Etsy that mimicked the butterflies I created for her invitations. I knew we HAD to have them.

I’m not joking when I say I told every person I handed a brunch box to, “just wait till you see the cupcake!” They were perfection.

Along with the umbrellas and chairs, we also set up a big round table that housed framed photos of the baby’s nursery! I knew it would be hard for our friends and family to be SO close to the nursery but not allowed inside to actually see it for themselves! So we framed a handful of photos of the nursery, which was such a fun way to invite our guests inside while still being safe outside.

And for the florals, I ended up doing LOTS of pink hydrangea plants! I was worried that pretty floral arrangements would either A) die in the heat instantly or B) not make a big enough statement and just get lost in the back yard… I thought something that felt more natural to the space would be best! I called around to a few nurseries to see if I could special order the last bunch of hydrangeas of the season. I was SO grateful for Tropic Decor in Apopka, FL for helping me source these beautiful blooms. The hydrangeas totally made the shower pop!

I can’t even begin to tell you how thankful I am that we were able to pull off this shower. Kyla was GLOWING and felt so celebrated. She never stopped smiling. She even said it was one of the top 5 happiest days of her life… and nothing could have made me happier than hearing her say that. I can’t wait to meet my niece and to see Kyla shine as a mom in just a few short weeks. I am thrilled that I was able to play a tiny part in making her feel as special and treasured as she is to all of us.

Also, I can not wrap this post up without saying that this may have been my “idea”, but I COULD not have pulled it off without the help of Ryan, Alissa (my co-host), and my family. This was truly a group project and one I would not have wanted to do without them, the total dream team.